The Moment You Fell

“Zing, zing, zing went my heartstrings, and the moment I saw him I fell.”

The words to an old-fashioned love song, and a phrase that can also describe the moment when you realized that there is something very special about Forever. It is a subject often discussed among Forever fans, and there are many different answers. When did you KNOW?

For me, it happened at the end of the very first episode. There is a moment that takes place in the hospital when Henry is visiting Jo after she has been shot. They talk for a few minutes, and we can sense that the recent events on the rooftop have already brought these two very different people together in the beginning of a unique friendship. As Henry is leaving, Jo studies his face and asks, “Henry, are you okay?”

He pauses, turns slightly, and looks at her. Henry wants to confide in someone, but knows that he can’t let down his guard, even to someone as kind and trustworthy as Jo has already proven herself to be. He utters the standard reply even though he longs to say more: “I’ll survive.” Then he smiles, just slightly; but behind the polite expression there is obvious sadness.

This, however, was only the beginning. I’ve watched the pilot episode many times since, and have come to the conclusion that the creative team behind Forever gave us a wonderful, special gift that day. They easily could have ended the episode at that scene in the hospital room. They had already told a complete story, and it was a story that intrigued me enough to plan to watch the next episode. I was already curious about Henry, enjoyed watching Abe and Lucas, wanted to learn more about Hanson, and discover Jo’s interesting backstory. But they didn’t stop the story there. What appeared to be a gem turned out to be merely the golden setting of the lovely jewel that was to come.

Henry walks out of the room. We see, at the same time that Henry sees, a young patient being brought in by the EMTs, and the sad, amazed way in which Henry watches him adds poignancy to his narration. We flashback to the time when Henry met Abigail and Abe. The music begins, that unforgettably perfect choice for this scene, In New York, by The Boxer Rebellion. Then, suddenly, Henry is in the present day, in the antique shop, but still the story unfolds. Jo arrives to request Henry’s assistance at a crime scene, Abe encourages Henry to go with her, and the episode closes with Abe watching the two of them walk away, as he smiles and turns the sign on the door to the word “Open”.

Henry’s voice over describes life as a series of moments. And so for me it wasn’t one defining moment in the pilot episode, but a series of moments, that won my heart, the moment I fell for Forever. Although we were only given one season, I am still smitten with this wondrous, imaginative, intelligent show.

After all, true love really does last Forever.

Watch the show on demand wherever you stream your shows, or buy the DVDs at Amazon.

Do you fondly remember that delightfully daring spy-fy series The Avengers, in which John Steed and Emma Peel teased, taunted, frolicked and flirted their way through piles and piles of dastardly villains? You DO? Then you will certainly enjoy what may possibly become their modern-day counterparts in crime fighting, Detective Jo Martinez and Dr. Henry Morgan in the sleeper hit ABC-TV show Forever. 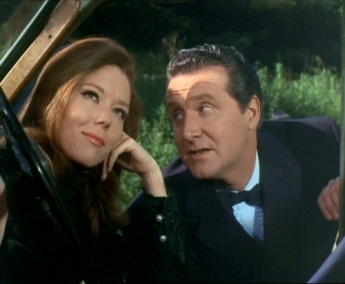 Back in the day, Steed and Emma not only invented the will-they-won’t-they scenario, they took it far beyond that into the deliciously fun realms of have-they-haven’t-they, did-they-didn’t-they, I-thought-they-weren’t-but-maybe-they-are, you-better-believe-they-did, and, in a stroke of brilliant screenwriting that stands unequaled to this day, left the question unanswered so that passionate fans may continue to debate all sides of the issue even as the ever popular show goes into the 21st century on DVD and online streaming. As the relationship between Henry and Jo changes and deepens with each new episode of Forever, some comparisons to the dynamite Steed and Emma dynamic are brought to mind.

Yes, like The Avengers, Forever does have witty dialogue, intriguing story lines, quirky villains and great clothes. I would venture to say that Henry’s dapper suits owe more than a passing nod to Steed’s designer clothes, and certainly the gallant, gentlemanly demeanor of these two characters bring an old-world charm that compliments their modern day co-horts in crime in a similar way. Jo captures and cuffs the bad guys with aplomb that would make Emma Peel proud.

Beyond these entertaining similarities, there are much deeper emotions being explored. In The Avengers, Emma pines for her husband, missing in action, and wonders if he is still alive. This prevents her from going forward in a relationship with Steed, although their attraction is obviously much more than mere sparks and fireworks. They trust each other, rely upon each other, and are strongest when they are together. Steed, who thoroughly enjoys being a bachelor, also respects Emma’s commitment to her husband and patiently adores her from afar, all the while giving the viewer the idea that if the news ever comes that Mr. Peel is no more, Mr. Steed will gladly give up his freedom for the lovely Emma. This respectful, tender, but still fiery dance is the secret ingredient that brought the Steed/Emma mystique to such maddening heights. Is it being echoed in the modern-day tango being played out on Forever? This reviewer (and unabashed Jenry shipper!) hopes so! 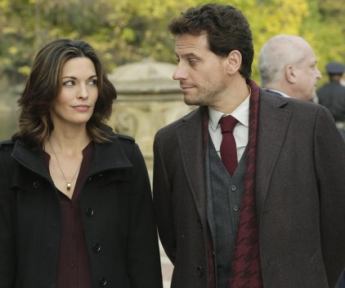 Halfway through the first season, we have already seen Jo and Henry, these two interesting characters, experience a dawning realization that they share a common heartache, the loss of a great love. They curiously observe each other from a distance, as though both Henry and Jo would like to reach out, to share this pain with someone who has experienced it, but each one is still hesitant to do so. Henry has a dark secret, of course, which makes his trust issues a bit greater than those of the average mortal, but Jo’s pain is more recent, and therefore more frightening to reveal to another person. It is obvious that Jo isn’t ready to fall in love again, and perhaps she feels that she never will. Even so, she is winning Henry’s trust and confidence just by being her own strong, sweet self, and he is gaining her compassion and loyalty as each week’s story unfolds. There are wonderful depths to be explored here, in a television show that has already proven itself to be more than the average hour that passes for entertainment nowadays – shows about lies, revenge, cheating spouses, weird little kids, and all sorts of things that most of us don’t even want to watch.

Forever was one of only two shows I set the DVR to record as a series, the other being Castle, another sleeper hit that became a top-rated show. If Forever and its long story are given a chance to be told, it will quickly become as memorable, groundbreaking and popular as The Avengers. Let us hope that TPTB see the possibilities that the rest of us already know are there, waiting to be revealed, within the elegant, understated and intelligent mystery of Forever.

Alas, Forever was not renewed, but you can still watch it through your favorite streaming service, and the DVDs are also available at Amazon.  Photos used by permission.

Journeys Inspired by The Thrill of the Chase

In Search of the Classic Mystery Novel

Exploring the Works of Rod Serling

Cozy Mystery (and Other Favorite) Books, Movies, and TV

If you are considering buying, renting or selling a home in New York or Connecticut, let my real estate experience go to work for you.

Important and cool events over time....

My thoughts on everything that makes up my life!

Enjoying mystery, crime and suspense in all media

This blog is my forum to share my love of reading and my passion for books!!

Encouraging writers to write, and then getting them read

Stories about the journeys folks are taking into retirement

The Art and Craft of Blogging

The latest news on WordPress.com and the WordPress community.