Readers say:  “An Excellent Mystery” – LH    “A real pageturner that I could not put down!” – CH  “Sparrow Falls is the kind of small town I have always fantasized about living in and it became real in the descriptive way this author tells the story!” – J    “Not a predictable plot.” – SD  “A good clean book full of colorful people and surroundings.” – P. 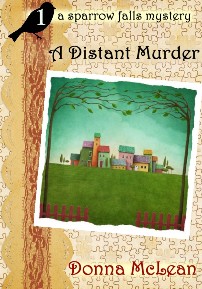 “Perhaps you came here to find the story of the woman your grandmother did not have an opportunity to become, or to finish the story of the one who interrupted her life so suddenly.”  These intriguing words send Addie McRae on a quest to uncover the truth behind a decades-old unsolved murder and find a killer who is still living, and killing, in Sparrow Falls, North Carolina. She is befriended by spunky southern lady Tilda MacArdan and the mysterious and angelic Morwenna Goss, known as the “story keeper” of the old Scottish cemetery. A list of suspects grows as Addie meets the eccentric townsfolk, most of them descendants of Highland Scots who settled the town centuries before. Does a gossiping trio of elderly women remember the first murder accurately, or are they merely keeping ugly rumors alive? An artist who painted the portrait of the beautiful murder victim may have loved her – or killed her. The handsome editor of the town’s struggling newspaper, whose grandfather was the prime suspect, could be Addie’s new beau, or her most dangerous foe. New suspects appear as the amateur detective unravels the cold case, and Addie learns that even in a quiet town things – and people – are never quite as they appear.

Butler Did It: The Mystery of MacGuffin’s Folly      sparrow falls mystery 2

Bless his heart! Poor old Butler Jenks gets blamed for everything that goes wrong in the tiny town of Sparrow Falls, North Carolina. Flowers that refuse to bloom. Sinks that overflow. Fires that happen mysteriously when no one is around. When a dead body is found in a locked room with no indication of whodunit, everyone wonders if the inept Butler could also be a perpetrator of murder. Everyone except amateur sleuths Tilda and Addie, who are not entirely convinced that Butler did it!

In this clever sequel to A Distant Murder, characters fondly remembered from book #1 of the Sparrow Falls Mystery series are back and new characters introduced in a classic mystery puzzler evocative of the Golden Age of detective fiction. 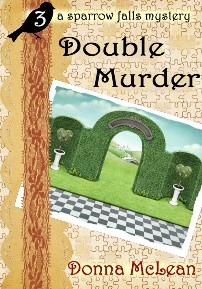 Spring is in the air in friendly Sparrow Falls, North Carolina.  The Official Ladies Garden Club is busy tending a tulip bed that will greet visitors at the entrance of the small southern town.  Romance is in the air, in the form of a handsome dark-eyed stranger who seems like a hero straight out of a paperback novel.  And mystery fills the atmosphere, as pervasive as the overwhelming fragrance of magnolia blossoms.  Even Tilda MacArdan, spry senior citizen sleuth, is seeing double, certain that she alone has spotted the long-lost identical twins who will inherit upon the impending death of rascally old millionaire Lachlan McGrady.   The only problem is, no one knows exactly who the twins are or what they look like after twenty years!   Officer Campbell must determine the truth behind the claims of two sets of twins, and solve the murder of one.  He believes he is hot on the trail of a coldblooded killer, but in typical Tilda fashion, the spry little lady and her sleuthing friend Addie have a few ideas of their own about whodunit.  (NOTE:  Formerly titled Iced Tea for Two.) 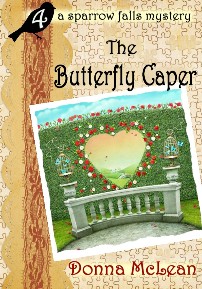 Summer is drawing to a comfortable close in cozy Sparrow Falls, North Carolina, even while unnerving and mysterious thefts are taking place in small towns throughout the southeast. When a bold thief hits Addie’s wee carriage house – and dares to do so even in the middle of the day – senior sleuth Tilda MacArdan is determined to find the perpetrator of this rude and dastardly deed, with or without the help or approval of the local police force. Her efforts send her on a merry chase to find a painted butterfly in a golden frame, and lead her to some revealing discoveries about her own                                                          family’s surprising past.

Book #4 of the popular Sparrow Falls Mystery series is a lighthearted caper with a touch of romance that is sure to please readers far and wide.